am an award-winning health and medical writer who has lived in the Morris Park section of the East Bronx practically my whole life, except for a brief stint in Arizona to help care for my late father who had suffered a serious medical issue while visiting family. A few months ago, I made the mistake of exercising my First Amendment rights on Facebook by disagreeing with members of South Bronx Unite Against Fresh Direct about the health-related consequences of Fresh Direct building a distribution center on a parcel of land in the South Bronx that is zoned for industrial use. 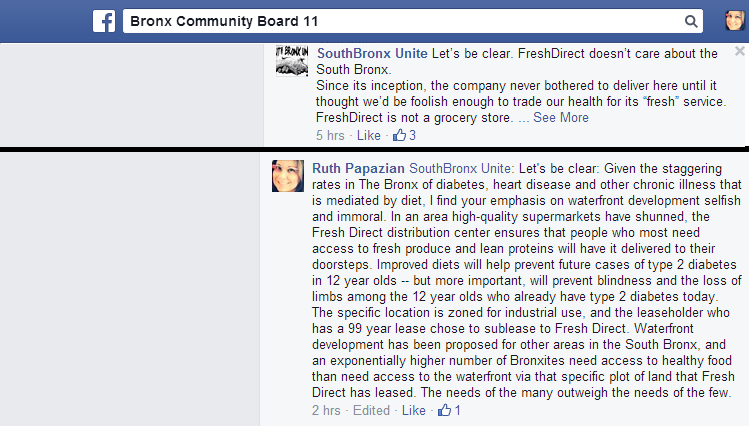 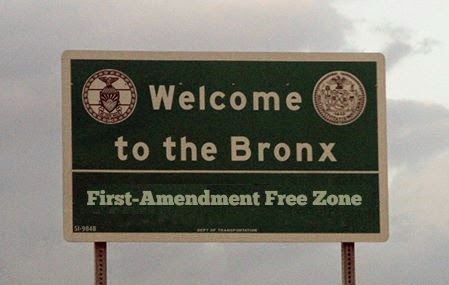 Members of South Bronx Unite targeted me for destruction, and began a relentless, months-long defamation campaign via social media to discredit and marginalize me.

I was also subject to other forms of online harassment. On Twitter Ed Garcia Conde, who publishes a self-aggrandizing blog called “Welcome2TheBronx,” accused me of creating an image that mimicked his logo, and claimed to have a Cease & Desist letter at the ready. The links I provided showed the templates and tools I used to create the image I made for a post on my Bronx Hipster blog, as well as the dozens and dozens of “Hipster X” logos that superficially resembled his logo and my parody of hipster logos.

Although Conde lacks the wit for parody, he is blessed with a jailhouse lawyer’s understanding of copyright law.

Conde claimed to have attorneys—note the plural—who had prepared a Cease & Desist letter, along with documentation that he had registered the “Welcome 2 The Bronx” logo.

All of Conde’s assertions in the Twitter exchange were falsehoods.

More important, Conde never registered a logo or any variations of it consisting of concentric circles that share a common center and include words, numbers and punctuation.

None of these inconvenient truths stopped Conde from continuing to dishonestly assert to anyone who would listen that I “stole” his intellectual property—another defamation, given what I do for a living.

While dealing with his fabricated intellectual property rights claims on Twitter, I also learned that Conde hadn’t registered “Welcome 2 The Bronx” or “Welcome To The Bronx,” either. 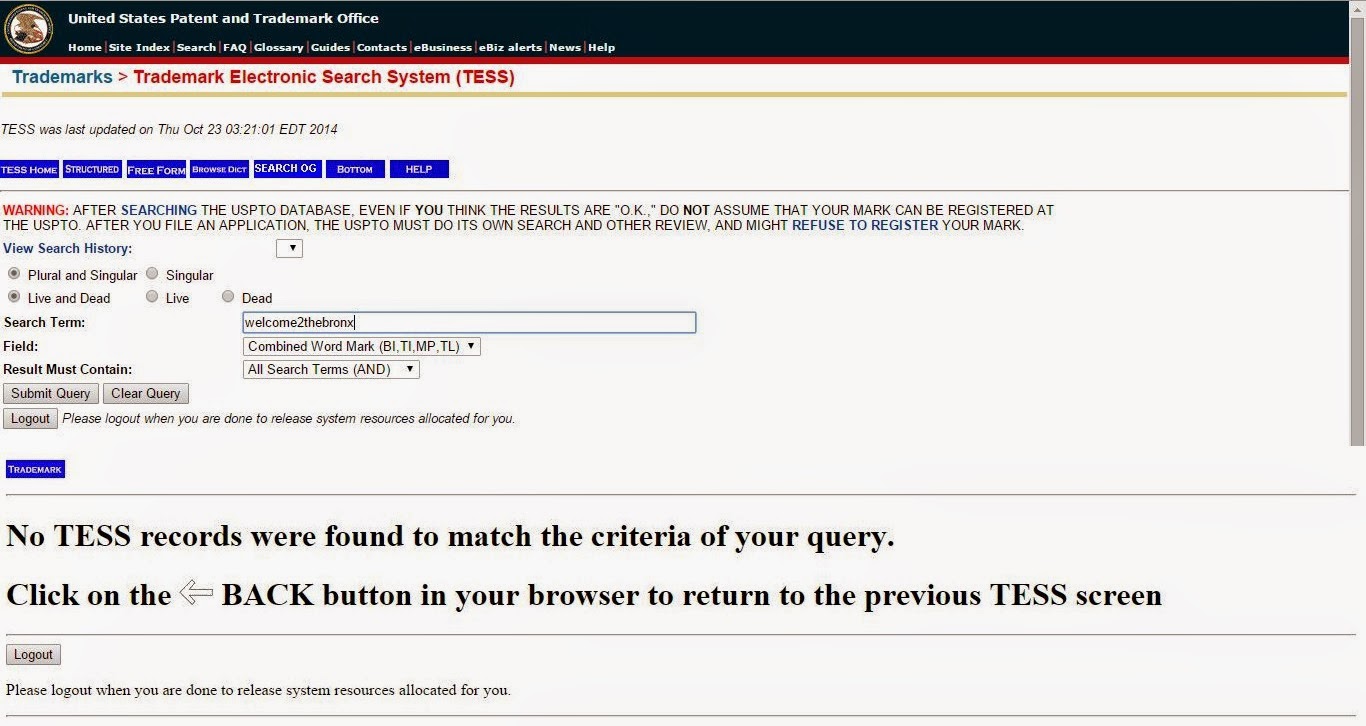 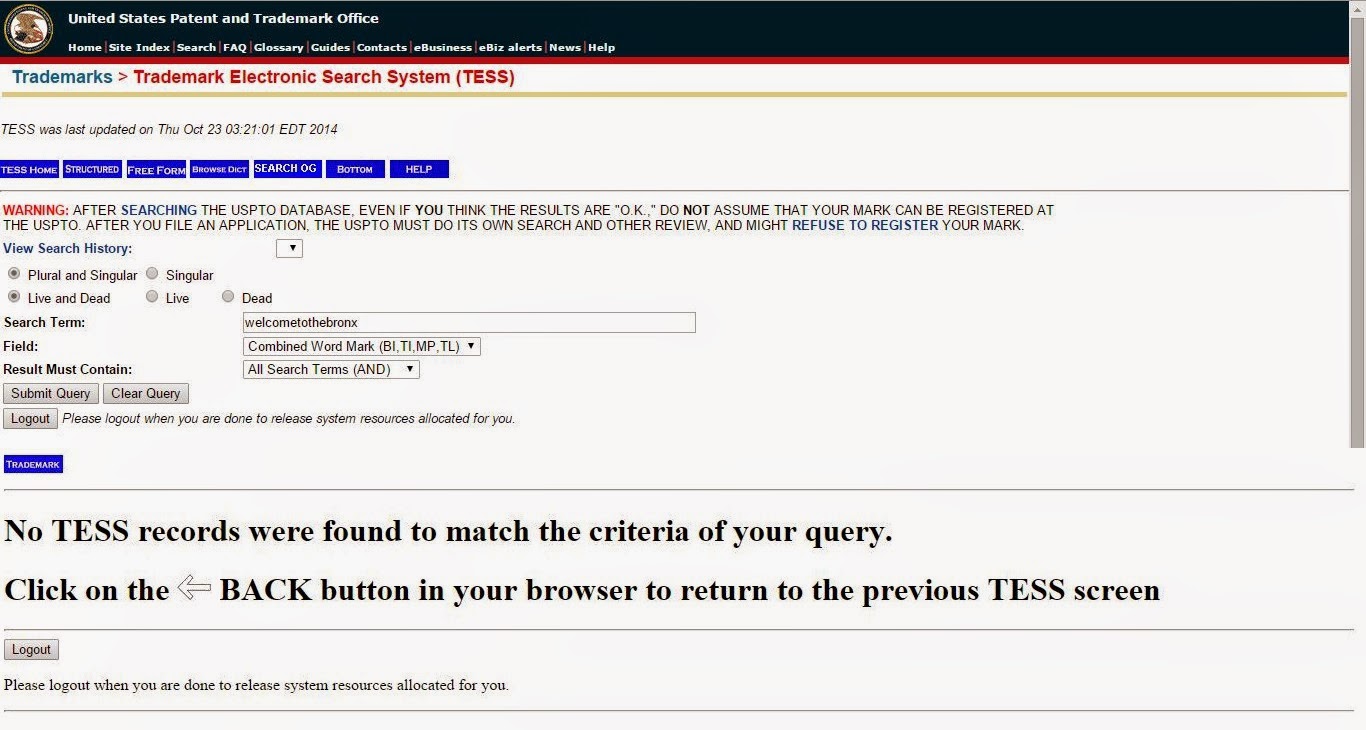 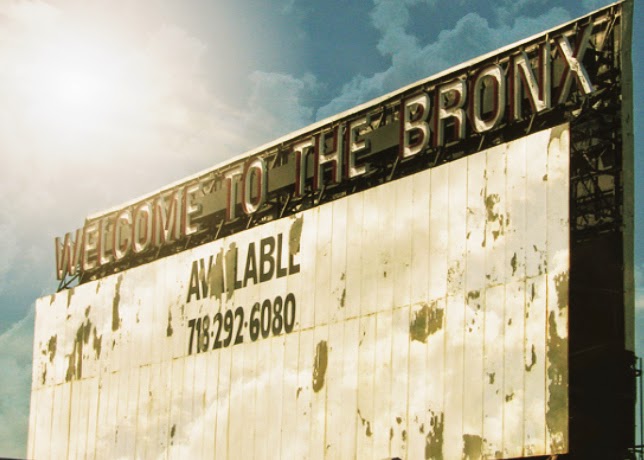 With my professional reputation under constant assault, I purchased the domains Welcome2TheBronx.nyc and WelcomeToTheBronx.nyc—lawfully and legally—so I would have something Conde values to trade him for something I value—an end to his and South Bronx Unite’s ongoing defamation and harassment.

Unfortunately, the harassment and defamation intensified when Conde published my contact information from the URL registry on Facebook, and started rabble-rousing with a vengeance. 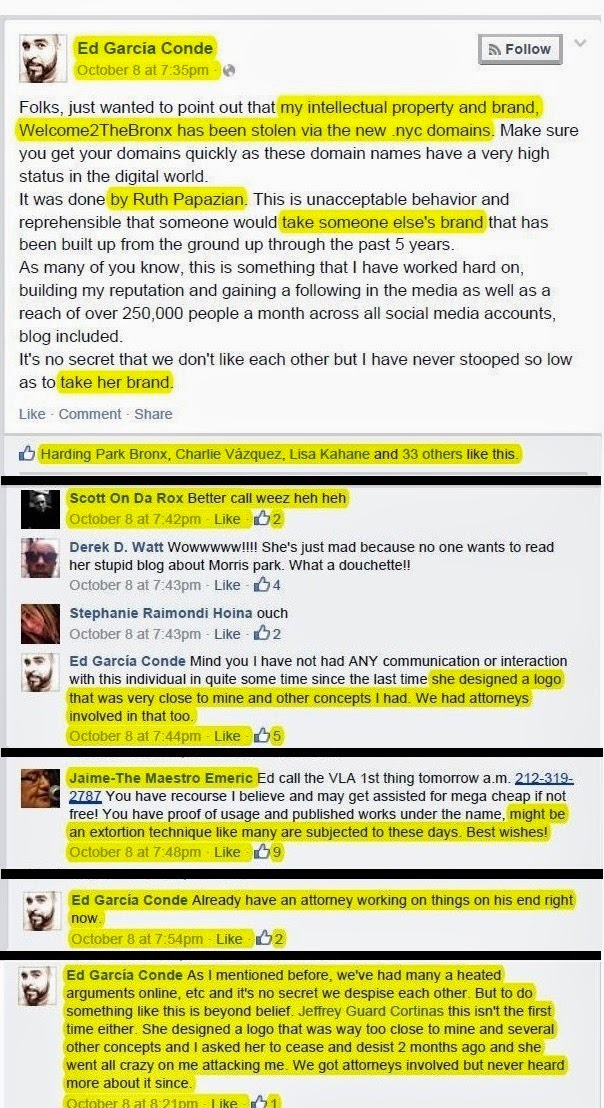 Note that several weeks after being informed that he had no copyright or intellectual property rights complaint against me. Conde again falsely asserts that I copied his logo design and that he had “attorneys” get involved. He also creates the defamatory impression I received a Cease & Desist letter that I am ignoring willfully, and goes on to assert that I “stole” the domains and “took” his brand—a defamation that one of his followers repeats by using the synonymous slang word “weez.”

One of Conde’s followers also mentions the word “extortion”—when used as a literary device in fiction, this is known as “foreshadowing.” Keep that word in the back of your mind as you read on.

Over the course of a couple of days, Conde kept egging his followers to defame me—and worse—with “Likes” and encouraged the harassment campaign to open a new front on Twitter. 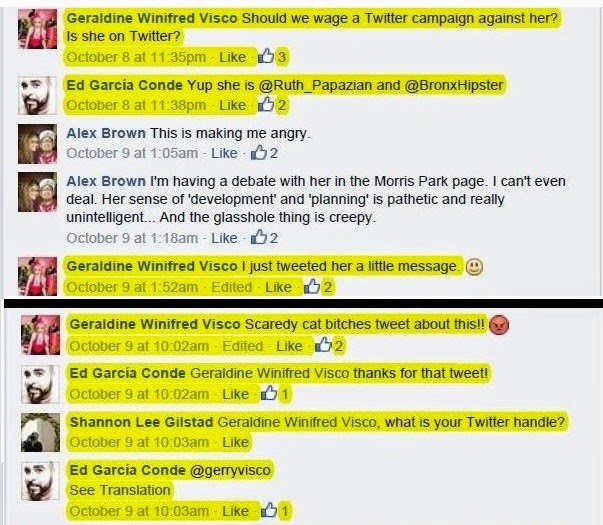 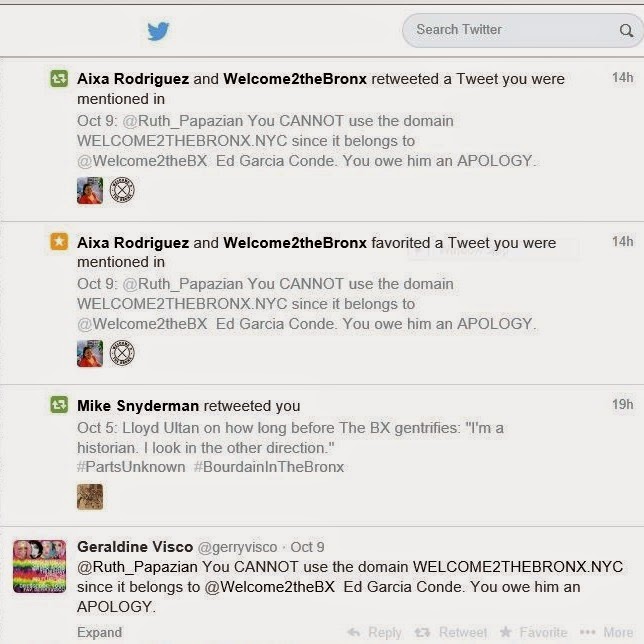 Conde also urged people to leave my Facebook group, 100% PureBronx, to “unlike” my Facebook page, "Williamsbridge: The Undiscovered Williamsburg," and to “unfriend me”—all of which undermined an ongoing Facebook marketing campaign. I was also kicked out of a Facebook group for bloggers based in the borough.

The comments in this portion of Conde’s thread clearly indicate that he and his associates were part of a coordinated effort to disparage me and ruin my reputation in the community. 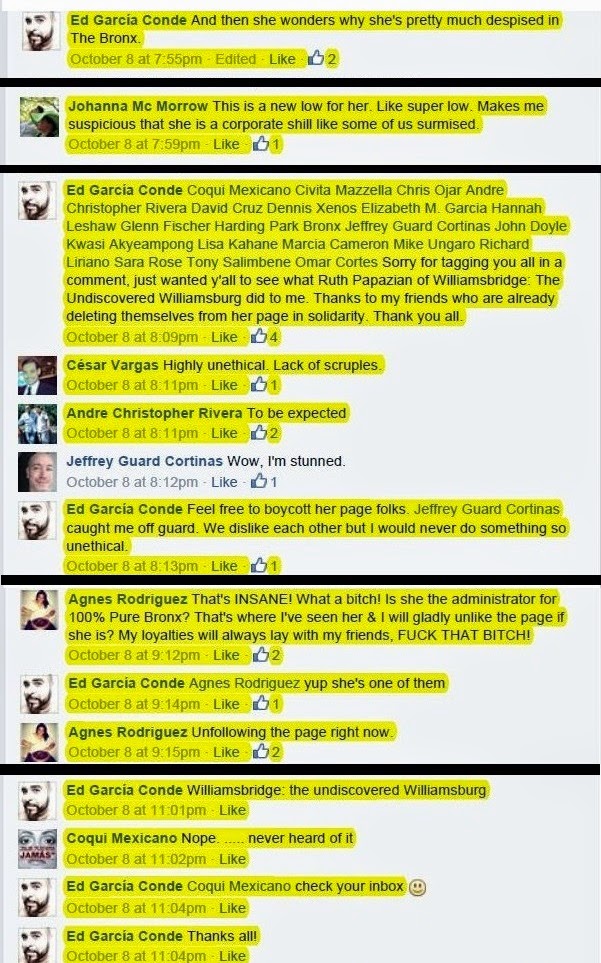 While all this is playing out on Facebook and Twitter, several people privately asked me why I wasn’t defending myself or refuting Conde’s accusations. I was warned that people in my community were equating my silence with guilt. Anyone who knows me and knows how feisty I am can appreciate the supreme force of will it took, but I was honor-bound to remain silent. Sal Conforto, the publisher of The Bronx Chronicle, had offered to mediate the dispute between Conde and me, and I wanted to show my good faith commitment to his efforts by not undermining them in any way.

The deal that Conforto was trying to persuade Conde to agree to was this: Ownership of the two domain names would be transferred to Conde after he reimbursed me for the costs associated with acquiring them during the premium registration period from October 3-October 5, and published the following statement on his Facebook pages to put an end to the months-long campaign of intimidation and defamation to which he and South Bronx Unite had subjected me:

"I am pleased to announce that I have reached a global settlement of all of my outstanding disputes with Ruth Papazian (a/k/a Bronx Hipster). I have withdrawn my objections to her logo design, and she has agreed to transfer certain domain names to me. I retract any prior statements that may have implied she has behaved unethically, either professionally or personally. I ask that all of you delete any prior personal attacks and refrain from future attacks on Ruth. I would like to thank Sal Conforto of The Bronx Chronicle for his gracious and invaluable assistance in helping Ruth and I resolve our differences. I hope that we can all maintain mutual respect as we work towards our common goal of making The Bronx better."

Conde rejected the deal, ostensibly because he wanted to continue to harass and defame me more than he wanted the two .nyc domain names. In any case, he opted to escalate his harassment by taking his baseless accusations to the media. When I was contacted by Denis Slattery, the Bronx Bureau Chief for New York Daily News, I provided a statement via email that, for the first time, gave my side of the story. When the article was published, not all of the information I had provided had been included, so I posted the email to Slattery on Facebook, along with an explanation of my silence, which no longer served any purpose.

It goes without saying, that Conde excerpted only those portions of the article giving his side of the story on Facebook. No matter, because he proved my case that I was being defamed by him—by defaming me in a newspaper with the seventh largest print and digital circulation in the United States: “Bronx blogger Ed Garcia Conde believes he's being extorted by fellow borough blogger Ruth Papazian who purchased two web domains similar to Conde's welcome2thebronx.com.” and “Garcia Conde calls the demands an attempt at extortion over his own intellectual property.”

“Extortion” is a criminal offense in which “one person forces another person to do something against his will, generally to give up money or other property, by threat of violence, property damage, damage to the person’s reputation, or extreme financial hardship.“ You know, like posting someone’s address and contact information online and inciting threats of violence against that person.

“To invoke the policy, a trademark owner should either (a) file a complaint in a court of proper jurisdiction against the domain-name holder (or where appropriate an in-rem action concerning the domain name) or (b) in cases of abusive registration submit a complaint to an approved dispute-resolution service provider.”

Conde doesn’t hold any trademarks or copyrights relating to the two domains he claims I “took” from him that he wants “back” and that’s going to be a problem for him. However, Conde had already warned me that he likes to settle disputes “by other means,” so I shouldn’t have been surprised that he instead opted to intensify his harassment.

I notified my domain registrar, who is lobbying for proxy registration of .nyc domain names so that others do not become victims of aggravated harassment and cyberstalking.

According to the findings of Pew Research Center’s first-ever survey about online harassment, 40 percent of the 2,849 internet users who took part reported having been victims. Of these, 22 percent have had someone try to purposefully embarrass them; 8 percent have been physically threatened; and 7 percent have been harassed for a sustained period.

Damage to one’s reputation is among the long-term effects of online harassment, per Pew Research Center:

“In a time when everyone from future employers to future romantic partners can potentially find personal information on others with a simple Google search, online harassment can cast a long shadow. 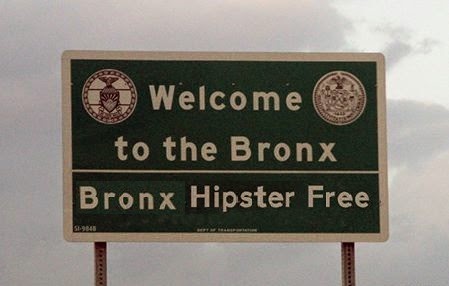 But that’s not going to happen, if I can help it. The Pew survey details steps people took to fight online harassment. These include: “reporting the person responsible to the website or online service; discussing the problem online to draw support for themselves; and reporting the problem to law enforcement.” I plan to use all these strategies, and will also pursue all appropriate legal options to deal with the defamation.

However, if something untoward does happen to me, the snippets of Facebook and Twitter posts and comments I include here will give the police plenty of leads. 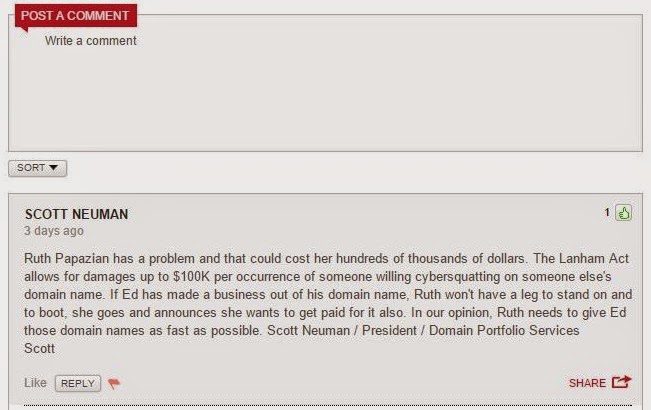 Let’s leave aside the fact that The Lanham Act deals with trademarks and has nothing whatsoever to do with domain names. Based on this comment about the article on the Daily News website, I wanted to discourage other people from practicing law without a license by ensuring that nobody could misconstrue my not using the two .nyc URLs as “cybersquatting.” Therefore, on the advice of an intellectual property attorney, I am now using them both.

Oh, and a note to Scott Neuman: I asked only for the costs associated with acquiring the URLs, and have the receipts to prove it.
Posted by Unknown at 8:19 PM